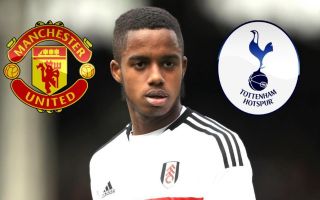 Manchester United are reportedly one of the teams to have enquired about sealing the transfer of Fulham wonderkid Ryan Sessegnon.

It was recently claimed that it looked like the versatile wide-man would be heading to Tottenham as he felt he’d get more playing time there than with United, according to the Daily Star.

However, there’s now been another update on Sessegnon from Duncan Castles, speaking on the Transfer Window Podcast.

As quoted by another piece in the Daily Star, Castles says some talks have been held over the England youth international leaving Craven Cottage this summer, with United among the clubs to have asked about him.

It seems things with Spurs may not have been as advanced as initially claimed, and MUFC would do well to snap up this bright young talent.

Sessegnon can play left-back or attacking midfield, and looks to have a big future at the highest level of the game.

The 19-year-old also looks an ideal fit alongside other young British talent that Ole Gunnar Solskjaer has gone after this summer with the signings of Aaron Wan-Bissaka and Daniel James.