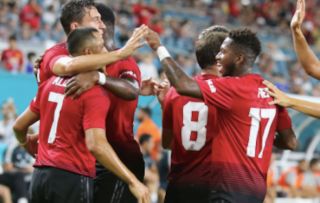 Manchester United midfielder Fred may or may not be getting married, apparently.

According to Samuel Luckhurst of the Manchester Evening News, the reason for Fred’s absence from Ole Gunnar Solskjaer’s pre-season squad is quite likely down to the fact that the Brazil international will be getting married some time next week.

Luckhurst deduces this from Fred’s partner posting a lot of marriage stuff on social media, though he also admits it seems as though the former Shakhtar Donetsk man also got married last year.

Fred is believed to be getting married next week, even though he appeared to have got married last year 🤷🏼‍♂️ . His wife has been posting about wedding plans recently. #mufc

We’re not sure if Fred is marrying the same woman, or simply renewing his vows – it’s all a bit of a mystery.

Still, congratulations to the guy, though not all fans responding to the tweet feel that way as they question his timing of the ceremony with the start of pre-season.

It may be, however, that the 26-year-old was expecting to be involved in this summer’s Copa America, so scheduled it to take place shortly after that, as he wouldn’t have gone straight back to United training anyway.