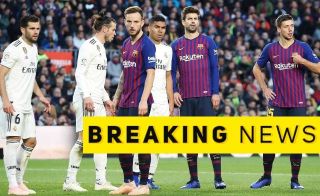 Manchester United may well have been handed a very good piece of news indeed if latest reports from Spain are to be believed.

We could do with a new signing in midfield this summer – Paul Pogba needs a proper partner, Fred’s been a flop, and the ageing Nemanja Matic looks past his best.

We’ve been linked a lot recently with Ivan Rakitic, who has long been one of the most underrated players in the world with a great career at Barcelona.

And it’s now claimed that Barca boss Ernesto Valverde would be prepared to approve the sale of the Croatia international as long as his club can secure a top class replacement this summer, according to Cadena Ser, as reported by Sport.

This follows a previous report from Sport that claimed we’d made contact over possibly signing Rakitic, which itself followed a link between the player and us in the Daily Record.

On top of that, Don Balon linked him with MUFC and suggested he’d cost around £53million, which doesn’t look too bad given his quality and experience, though it’s perhaps a bit much for a 31-year-old.

If United can get that fee down, let’s hope this latest development can mean Rakitic soon makes his way to Old Trafford.