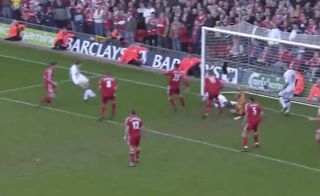 Manchester United are paying tribute to John O’Shea, who has today announced he’s going to hang up his boots at the end of the season.

The Irishman, currently at Reading, had a great career with the Red Devils, despite never exactly being the most naturally talented footballer.

He had his fair share of great moments, though, with United’s Twitter account getting fans to vote on their favourite – with his late winner against Liverpool the winner so far!

See below for O’Shea’s sublime strike against Arsenal as well, plus a cheeky nutmeg on Luis Figo in that Champions League classic against Real Madrid in 2003.

Pass from Scholesy = 👌
Finish past Almunia = 🍟
Celebration from Sheasy = 😲 pic.twitter.com/dNOyiLLYYT