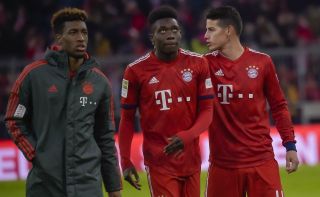 Manchester United have some exciting young attacking talent on their books right now in the form of Mason Greenwood and Tahith Chong, so a spending spree in that area of the pitch is surely not going to be a priority this summer.

However, Spanish outlet Don Balon claims the Red Devils are looking into signing both Philippe Coutinho and James Rodriguez for a combined £129million.

While it remains to be seen if either of these come to pass, it’s perhaps a sign of a continued worrying trend involving big-name wingers and attacking midfielders being linked with the club.

If even one of those names came in, or any one of other rumoured targets like Jadon Sancho or Callum Hudson-Odoi, it could truly spell the end for the likes of Greenwood and Chong at Old Trafford.

Given Ole Gunnar Solskjaer’s willingness to promote academy players this season, that would be a real shame.

In the comfort of the interim manager’s job, the Norwegian could perhaps afford to gamble on developing youngsters in that way, but this may be harder now that he’s been given the position permanently.

Man Utd chiefs will now be putting more pressure on Solskjaer to deliver big silverware quickly, which could mean more ill-advised spending sprees the likes of which we saw under Jose Mourinho and Louis van Gaal.

Coutinho and Rodriguez fit the mould perfectly in terms of being big names that will get fans talking and generate hype – something Ed Woodward seems to think will inevitably then lead to success on the pitch.

It hasn’t worked that way, however, and Solskjaer following the Fergie blueprint of promoting from within is surely our best route back to the glory years – with Greenwood, Chong and several others like James Garner and Angel Gomes up there with the most exciting talents to come through our academy in a long time.

It is these players we need to be building around to continue the rise in the feel-good factor at Old Trafford again, so let’s hope we decide to save £129m on two risky signings of players looking past their peak, and build around the youth and enthusiasm of players who know what it means to wear the shirt, and whose best years in it are still to come.