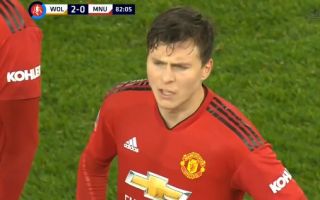 It’s fair to say Victor Lindelof was not a happy man yesterday as he hit out at the Wolves bench during Manchester United’s FA Cup defeat.

The Sweden international was somewhat lucky to stay on the pitch as VAR overturned the referee’s decision to give him a red card, and perhaps some in the Wolves dugout disagreed.

Showing seemingly quite fluent Portuguese that he’s retained from his time at Benfica, see the video above for him hitting out at some Wolves staff.

Manager Nuno Santo is Portuguese, as are a number of Wolves players, but it’s not clear from this footage who the abuse was aimed at.