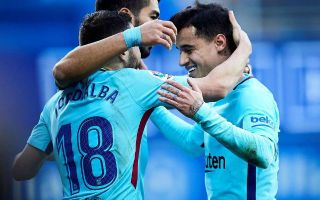 Manchester United have been handed some encouraging transfer news from Barcelona regarding a potential swoop for Jordi Alba.

The Spain international has been linked with the Red Devils several times in recent months, with some doubt over his future as he nears the final year of his contract.

MORE: (Video) Romelu Lukaku shows he needs to go in one dire moment for Man Utd vs Leicester

And the latest from Don Balon is that Alba is now ready to rethink an offer from Man Utd as Barca prioritise handing star player Lionel Messi a new deal instead of him.

This is despite Messi’s current deal not even being close to expiry, which Don Balon state has got Alba jealous and unsettled.

The question of whether United really need Alba is a whole other matter, however.

The form of Luke Shaw has been hugely improved this season, while Ashley Young remains a solid backup option in that position.

However, it would be hard to turn down a quality performer like Alba if he became available – the 29-year-old is a superb all-rounder who’s arguably been the best in Europe in his position for a good few years now.

Shaw could surely benefit from his presence in the Old Trafford squad, as he wouldn’t be a long-term threat to his place anyway.

So, while MUFC should by no means make Alba an urgent priority, it’s little surprise Don Balon claim we have an interest in him in case everything goes pear-shaped for him at Barca.