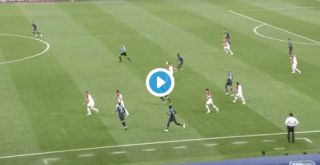 Manchester United midfielder Paul Pogba gets a lot of grief for not being a complete enough player, for favouring flair over substance, but he more than put his stamp on yesterday’s World Cup final.

The France international was immense for Les Bleus as they beat Croatia 4-2, and this moment early on in the build-up to their third goal sums up his all-round quality.

Graeme Souness won’t like it, but here’s Pogba deep in his own half spreading a sublime cross-field ball on the volley that finds Kylian Mbappe, which eventually led to him scoring a crucial third.

This put France 3-1 up against Croatia and on their way to victory, and there can be no questioning Pogba’s contribution to the country picking up the World Cup trophy for the second time…

Pogba's pass to Mbappe which led to his goal… pic.twitter.com/1gwJrq9Unc