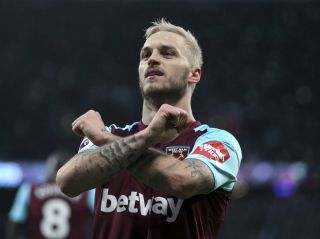 The Austria international says he hasn’t heard anything from his agent and that he’s simply focused on his current club.

MORE: Real Madrid make contact over Jose Mourinho, but now’s the wrong time for Manchester United to let him go

And that, friends, is very good news indeed for United.

Speaking to Sky Sports, Arnautovic said: ‘I am happy with my job. Whatever happens will happen. I’ve not heard anything.

‘Even three weeks ago I haven’t heard anything. That’s why I cannot say anything about it. The only thing that bothers me is that I am in good health and that I am able to play football.

‘I have a contract at West Ham – that’s all we have to talk about.’

We’ve recently been linked with a shock interest in Arnautovic, most likely as cover up front after Zlatan Ibrahimovic’s departure, with the Daily Mirror reporting he could cost us as much as £60million.

Put simply, it’s as clear as day that this is not the calibre of signing we need to be chasing this summer.

Bild have reported, for instance, that Bayern Munich striker Robert Lewandowski has been offered to us and other top clubs, and we absolutely have to be after the world’s best talent if we are to catch Manchester City next season.

While it seems unlikely we’d continue our pursuit of Arnautovic at that price anyway, it’s still worrying that Jose Mourinho is looking for someone so obviously to warm the bench rather than provide genuine competition to Romelu Lukaku.

The 29-year-old could serve some purpose in our squad in theory, but with Anthony Martial and Marcus Rashford struggling to blossom under our current manager, truly world class talent may be our only hope.

Mourinho, after all, has largely worked with big budgets and the world’s best players for much of his career. Lewandowski would suit him perfectly, whereas developing Martial and Rashford does not.

Let’s just hope this is the last of the Arnautovic rumours for now anyway.