Gary Neville talks a lot of sense, especially when it comes to Manchester United, and it’s hard to argue with him again with his latest analysis of the Alexis Sanchez situation.

Speaking to Sky Sports, the former Red Devils right-back made it clear he feels Sanchez’s arrival at Old Trafford in January has hit the form of both Anthony Martial and Marcus Rashford.

There’s no getting away from it – both were extremely poor for us on Friday night in the 1-0 defeat to Brighton and it would not be at all surprising if that were the last time Jose Mourinho trusted them for some time.

It’s easy to forget, however, that both were looking very promising for us earlier this season and finally looked like fulfilling the hype that’s surrounded them for so long.

Neville feels both were progressing well before Sanchez’s arrival hit their first-team hopes and had a negative impact on them.

‘If you look at the actual stats and you think about before Sanchez arrived at the club, they (Martial and Rashford) were playing quite a bit of football, they were scoring goals and contributing, they had assists,’ he was quoted in the Metro.

‘But since Alexis Sanchez has come to the club, obviously he’s played a lot of the games, and that’s what’s happened.

‘There’s been a big impact negatively, so they’ve got to get back to the standards they were setting earlier in the season and what they’re capable of.’

While the Sanchez signing generated so much excitement, Mourinho has to be questioned again for putting that short-term gain ahead of developing two immensely gifted young players.

The Chilean hasn’t exactly looked the best fit for us so far and many will rightly suggest this was a signing made almost for the sake of it – to land another big name and to get one over on Manchester City.

That’s not a recruitment strategy – it points to an overall lack of plan or direction at a club that for so long put so much emphasis on development and identity.

If Martial and Rashford both left this summer you could hardly blame them, but like Romelu Lukaku, Kevin De Bruyne and Mohamed Salah at Chelsea, you just know they’re going to be names that come back to haunt Mourinho. 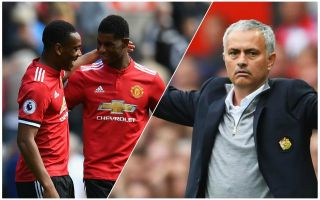