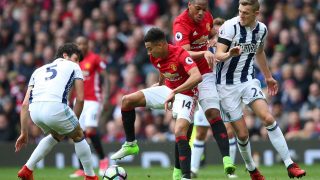 Manchester United travel to the Hawthorns on Sunday to face West Bromwich Albion knowing a win for us will still keep our title hopes alive. The hectic Christmas schedule means that our manager has to rotate his squad in order to keep his players fresh but we have to careful against West Bromwich, who have improved under Alan Pardew but have still not won a league game since August. Here are 11 players that could take to the pitch against the Baggies.

Having kept his 10th clean sheet in the clash against Bournemouth, David de Gea will be looking to maintain his excellent run of results against a goal-shy West Brom. De Gea has been an ever present player in Jose Mourinho’s team since the beginning of the season.

With Ashley Young rested in the last game against the Cherries, the 32-year-old rejuvenated winger turned defender is expected to return to the side. Phil Jones will keep his place after performing well last time out, while his partner at the heart of the defence should be Chris Smalling.

The 28 year old England defender has looked rock solid in recent weeks, while at right back, Antonio Valencia should also get the nod in what promises to be a physical game away from home.

Paul Pogba serves the last of his three-game suspension for his red card against Arsenal, therefore Ander Herrera should play alongside Nemanja Matic, who despite a niggling injury may play the game. Herrera has not hit the heights of last season, and will be looking at regaining his form during this festive period. Further forward, the likes of Rashford, Lingard and Mata will fancy their chances.

Rashford scored in the Manchester Derby but was used as a substitute in the last game while Lingard has profited in the exclusion of Henrikh Mkhitaryan from the starting 11.

Romelu Lukaku needs a rest having looked knackered in recent matches though he scored in the last game. His celebration was somewhat muted as the weight of pressure and lack of goals looks to be affecting his confidence. Zlatan Ibrahimovic will be looking at scoring here again at The Hawthorns after his goal last season and should get to start this one.