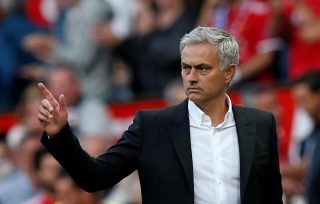 “The title race is over”

One former Premier League star has savaged Manchester United under Jose Mourinho after some their performances this season. That player comes in the form of Robbie Savage and he made his feelings on Man United’s season pretty clear.

While they do sit second in the Premier League table, the Old Trafford side have not exactly been impressive this campaign. Some performances against big teams left a lot to be desired and the game against rivals Manchester City tipped some fans over the edge.

That has brought some immense pressure and criticism on Jose Mourinho and Robbie Savage has added to that in his Mirror column. “The title race is over. I called it last month, and nobody is going to catch City,” he explained.

“But as good as Pep Guardiola’s side were at Old Trafford, and 49 points from a possible 51 is absolutely phenomenal, I have to ask the question.”

“Would the outcome have been any different if Mourinho had not been so cautious, and the shackles were off?”

“For Manchester United to play for 45 minutes at home, and barely get in the opposition’s box – let alone shoot – is not what the club stands for. At times it was men against boys in the derby.”

“City are on course to win the title with 100 points and 100 goals, and the challenge facing Mourinho now is to make sure the gap does not become embarrassing.”