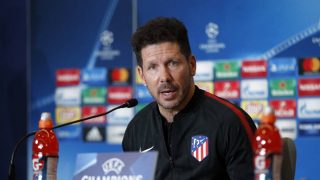 Manchester United and Barcelona have  both been handed a huge boost in the chase for Antonie Griezmann, with Ateltico Madrid manager Diego Simeone admitting the player could leave in the summer if he wanted to.

Simeone made the point that he also wants to see players grow – and will not keep them at the club if they feel they’ve done everything they can and need to move on to another side or league in order to further their career.

Simeone said: “Of course Griezmann will be able to leave at some point, the same way Diego Costa and Arda Turan were allowed to leave.

“I love my players a lot and I love to see them grow. I am not ungrateful.

“If a player comes to me and says: ‘coach, I have a once in a lifetime chance to play for a certain team, I want to leave’.

“If he did all he could for me as Griezmann does, I’ll say it’s no problem. I know that he needs to grow.

“Of course Griezmann will be able to leave at some point, the same way Costa and Arda Turan were allowed to leave.”