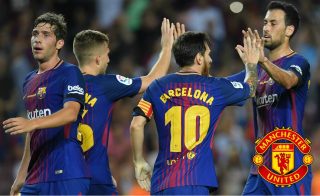 Catalan newspaper Sport state on Wednesday that Spanish midfielder Sergi Roberto has received ‘important proposals’ from Chelsea, Juventus and Manchester United, however, it is believed that he wants to remain at Nou Camp.

The Spanish midfielder has subsequently been linked with a switch to Manchester United and Chelsea as both Premier League club are keen on to sign a versatile midfielder who can also operate on the right-flank.

With Jose Mourinho having genuinely serious interest in Barcelona midfielder, Barcelona versatile midfielder Sergio Roberto isn’t in a hurry over his contract renewal, and the news will come as a huge transfer boost for Chelsea and Manchester United.