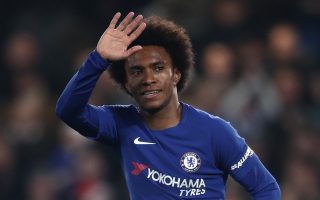 The 29 years old Brazil international has been linked with a move to Man United in recent months to join his former coach Jose Mourinho, according to Daily Star.

Willian has struggled to get into the starting XI this season so far under Antonio Conte and is unhappy. Willian has started just 8 Premier League games this season, making a further 9 appearances as a substitute.

Following his situation at Chelsea, Man United is trying to profit and make a move in January transfer window.

Also Jose Mourinho is a huge admirer of the winger and would love to bring him at Old Trafford.