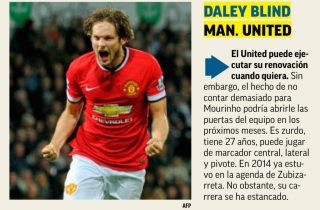 The upcoming transfer window is near and teams are already searching for players that might need. According to Spanish media Marca, Barcelona are ready to sign Manchester United dutch defender, Daley Blind. Barca’s defence recently is suffering from injuries and they must sign one or two defenders in January.

Samuel Umtiti who has been the best defender in La Liga until now, is injured for several months and Barcelona must replace him until he recover from injury, and reports from Spain say that Daley Blind is in Barcelona’s radar.

It’s been a rough season for Blind at Old Trafford. He played three first games of the season, but since then he barely played as a starter and last appearance of him playing was in gameweek 6 against Southampton. Media from Spain and around confirm an interest from Barcelona.

Few weeks ago The Times reported:
“United are expected to trigger the one-year option they have on Blind’s contract, which would then expire in the summer of 2019, but the motive behind that move is to ensure that the club receive a fee for the 27-year-old.”

Now Marca claim that Barca may sign him, as reported in Sport Witness:
“Marca, admittedly more a Madrid leaning newspaper, on Thursday report that Blind is an option for Barcelona, whether that be in January or next summer.”