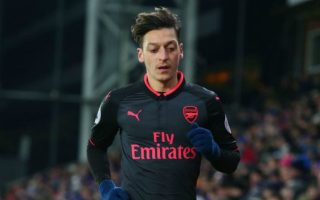 According to Daily Mail, German International Mesut Ozil might choose Manchester United instead of Barcelona, and to reunite with Jose Mourinho. Ozil will be out of contract with Gunners next summer and probably he will refuse the renew of contract when they offer him.

Arsene Wenger has confirmed that the club is working on a renewal with the midfielder. Arsenal have trying to negotiate for a new contracct, but the player has been refusing to sign it.

According to latest news from England the player is seeking and hoping for a move to Manchester United. Ozil would reunite with Jose Mourinho, the manager who brought him to Real Madrid and had a good relationship with him.

On the other side, Mourinho is looking for a very skilled midfielder and Ozil would be perfect for his team. Ozil won several titles under Mourinho’s at Real Madrid and bringing him to Man United, would help the team a lot to be again on top of the Premier League.

Other club that is very interested for Ozil is Barcelona. Blaugrana team need a midfielder and Ozil or Coutinho could arrive at Nou Camp in January or in summer transfer window. So Manchester United must ‘beat’ Barcelona in order to take German midfielder’s services.