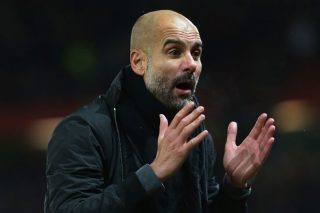 “I would like to take charge at Old Trafford some day” admitted Pep Guardiola.

In his new book Pep Guardiola has told that he can see himself managing Manchester United at some stage of his career.  The ideal successor to Louis Van Gaal would be Pep as he wins loads of games and he is a real cool dude.

He’ll let the skipper have a pint

Wayne Rooney won’t need to try and sneak himself a cheeky pint anymore:

Pep will be taking Wazza down the local for a team bonding session:

He’s down with the kids

He’ll fit right in with Adnan and his unknown mate with an afro:

He’s down to earth…

It is known that footballers are prone to off the field issues but Pep understands. Pep has had his own concern at home and he’s not scared by the world to know…

He knows everything about the legends

Pep Guardiola is the ultimate perfectionist,like a certain previous manager(no, not David Moyes)… something that is astonishingly summed up in this one vine:

As his boss whipped him into shape Thomas Muller got the full Pep Guardiola hairdryer treatment in training. Suppose if Pep was in charge now… Anderson and Rooney would be streamlined athletes.

Oh, moreover, he enjoys a great celebration with the players too…