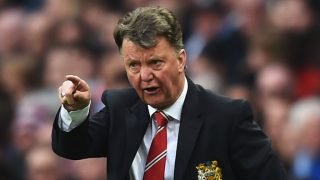 This season, though, fans have already been treated to crisp, brisk and astonishing matches, and even though United have dropped more points than at this stage under David Moyes last season, you would struggle to find a match where they played uninteresting football under Van Gaal.

Surely not, in terms of overall play, the fans have been given their money’s worth. There is an obvious plan of action, and even though not all plans have come to fruition, there have already been plenty of “wow” moments.

#2 The team seems to be United, once again

Under Van Gaal, there seems to have been a reinstatement of fighting for a single cause Manchester United. The late rallies against Chelsea and Manchester City, games that last season United simply rolled over in saw a resurgent United showing shades of a Ferguson-era team.

No longer divided, but obviously United on the surface it appears that the Dutchman has won over the dressing room and brought them together.

The word “philosophy” has been thrown around so much that it would seem Dr. Freud has taken over at Manchester United, not Van Gaal. But however you interpret the word, doubtlessly the tactics, the ideas and concepts put forth by Van Gaal look relevant to this day and age of football.

The three-at-the-back tactic, the high pressing, the quick, one-touch football and the constant movement of players are the factors that transforms United into a modern day football team.

Despite being in a very definite standard of play, Louis van Vaal’s plans are being foiled by injuries, suspensions, individual mistakes and poor performance of strikers. It is evident that United is a very high quality team waiting to flourish and bursting out the chaos and turbulence that United are lastly suffering.

This season United have not been able to field an unchanged back line for any of their matches. No pair of centrebacks has played more than twice together, and the only centreback to play more than 8 matches lastly dislocated his shoulder while attempting a sliding tackle.

The manager’s plans are being undone by various factors at the moment, but gradually things will settle down. And it will only take a few games with the same players playing week-in, week-out for the identity to form and for everyone to see.

Van Gaal has a similar track record with Jose Mourinho. In his time at Bayern Munich, the Dutchman experienced an inconsistent and slow start to the season with a star-studded team and Munich were midtable in November and staring down the barrel of a first round exit in the Champions League.

Results improved slowly but surely as players started to play the way Van Gaal desired, and by March Bayern were top of the table, a position they would not relinquish for the rest of the season.

Under Van Gaal, the team looks full of energy and while results have not gone their way, strengthen can be seen in every match that United play.