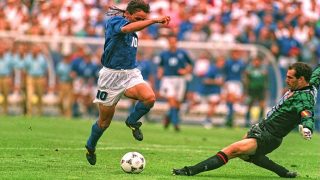 Michael Ballack was a player who accumulated more runners-up medals than winners’ medals. The most unfortunate player in football is the Germany international. The central midfielder won the German Footballer of the Year award thrice and he has come the second best in the Premier League, the World Cup and Euro Championship with both club and country a number of times. Furthermore, Ballack has played in Champions League final twice but he lost on both occasions.

Eric Cantona was the driving force of Manchester United in the 1990s. In 1992 Premier League’s birth, he was instrumental in Manchester United winning it in four of the first five seasons. Despite the bans, suspensions and an arrest, the number 7 shirt holder was doubtlessly a cult figure in England. However, he was never able to establish himself or the club as an elite power. But, he has received a number of honours and the biggest award he has received is the inaugural English Football Hall of Fame in 2002. Nevertheless, he never won a Champions League trophy.

The Netherlands is one of the finest strikers to have come from the goldmine of talent but he has never won the Champions League. In European competitions he won the UEFA Cup twice and in 11 seasons with Arsenal.  Also he has won the Premier League thrice and the FA Cup four times. Moreover, he was an integral part of the Invincibles team. The best way to sign off for the Non-Flying Dutchman would have been a Champions League trophy.

Despite not winning the Champions League, Roberto Baggio has been one of best players and one of the top scoring Italian strikers of all time. He spent five seasons at Juventus, where he produced a lot of goals. During his lead as Juventus he was the winner of UEFA Cup triumph over Borussia Dortmund in 1993, scoring two and setting up a third. When Baggio’s name is mentioned, the first memory that comes to mind is that lost penalty in the 1994 World Cup fina

Despite winning the FIFA Player of the Year thrice, Ronaldo has never won the Champions League.  He has won the World Cup twice with Brazil and after Miroslav Klose, he is  the second highest goal scorer in the history of the World Cup with 15 goals. Real Madrid failed in their attempts to win an unprecedented tenth title, although Ronaldo scored 104 goals for the club.  In 1997 he was the winner of UEFA Cup Winners’ Cup with Barcelona and in 1998 he won a European triumph which was a UEFA Cup with Inter Milan.