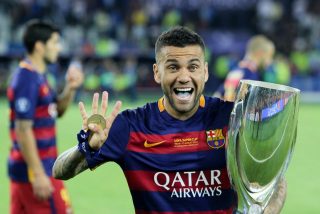 Vlaar is a player that Louis van Gaal knows everything about as both of them worked together in the Dutch national team.

At the World Cup the Aston Villa man was a crucial element in Van Gaal’s defence and put in some stunning displays against the likes of Spain and Mexico. Since then, his stock has risen and he could move elsewhere in January given that his contract is set to expire in the summer.

Since arriving from Feyenoord in 2012 for a fee of £3.2m, the 29-year-old has ne astonishing and was a shining light in a poor Villa team

In January Villa will mostly have to sell him for a cut-price deal and it could be as less as £5m.

Another option that Manchester United can look at in January is the Schalke skipper.

Given that he is contracted with the club until 2017, reports tells that the 26-year-old Germany international could cost somewhere around £14m.

Höwedes has played at Schalke since 2007 and has performed 245 appearances for the club. Lastly, he lifted the World Cup with Germany recently and despite being deployed in the left back position he had an impressive tournament.

After a recent run of poor displays, the Barcelona centre-back is now the fourth option at the club. After falling down the pecking order, reports in Spain indicate that he is absolutely considering his future at Barcelona.

Pique has already represented Manchester United under Sir Alex Ferguson but in his fourth-year spell from 2004 to 2008 he managed to make only 21 appearances for the club. Reports indicate that the 27-year-old defender could cost somewhere around £23.6m in January.

United should act quickly though as Chelsea are favourites to land Pique in the next transfer window as a long term replacement for John Terry.

Reports in Germany show that the World Cup winner would like a move to Arsenal. Nevertheless, that doesn’t mean that United shouldn’t try to sign Hummels. The Dortmund centre-back cost somewhere around £30m and was connected with a move to United in the summer.

This time around, with Dortmund’s poor league form, they will not be able to stop At the moment Hummels is out injured with a stretched ligament and is expected to turn back to action in late November. He will be the perfect signing for Manchester United as they have lacked a leader at the back since the transfer of Nemanja Vidic to Inter.

The Barcelona right back told recently that he would like to end his career in the Premier League. Manchester United will confront competition from Arsenal to sign the Brazilian international but considering his high wages, he is likely to end up at Manchester United.

Current United right back Rafael had a disappointing start to his league campaign but has improved in the last few weeks. Nevertheless, manager Louis van Gaal could run after Alves given that the 31-year-old would add extra attacking talent from the defence and isn’t afraid to put in a tackle or two when required.

A potential deal for Alves will depend on United’s league position come January as Alves will want to move to a club that will at least play in the UEFA Champions League next season.