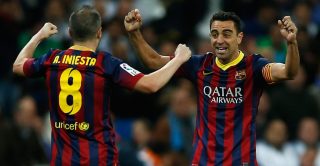 Andrea Pirlo had appeared his best years of his career when he combined with a strong box-to-box midfielder in Auturo Vidal. Pirlo’s weaknesses that is brought by his age, is vanished by Vidal’s tenacity. Also Vidal has strengthened as player by this dous, Pirlo has maximize his talents irrespective of his limitations. The partnership permits players to shine as individuals but also is effective for the team.

In 2002 the midfield partnership of Gilberto Silva and Patrick Vieira reinforced Arsene Wenger’s initial success at Arsenal. In FA Cup winning team Silva was instrumental that season but in the 2003/04 season, when he cooperated with Vieira to help Arsenal to an unbeaten season in the league, showed his real talent. Despite struggling to replicate the partnership between two midfielder, Wenger has failed so far to recreate the great partnership of Vieira and Gilberto.

Makelele was considered as a nonsense midfielder who was powerful, tenacious and a marvelous smart player. To keep the ball away from his goals was his first concern.

On the other side, the definition of sophistication was Zidane. Every time he was on the ball, he wandered around the pitch exhibiting magic. His great skill was in the attack but he also was a physical force at times. The perfect match was every time he paired with Makelele, both complementing each other’s force. Real Madrid won the league twice (2001, 2003) and the Champions League in 2002 in the period that both played together in midfield

Both midfielders won the most of Manchester United;s early success under Sir Alex Ferguson. With his potentiality to spot a pass Scholes was the technically gifted player while Keane ran rampant in the midfield.

With his tenacious running and tackling Keane cares of defence, covering every blade of grass, haggling tougher opponents and intimidating the opponents with his tough attitude while Scholes took the burden of creativity exposing gaps in opposition defenders and granting Giggs and Beckham to wreak havoc.

The ethereal players are Xavi and Iniesta, both marvelous and highly gifted, enough to be able to strengthen the team on their own. Both them built the greatest team in the history of club football. Xavi and Iniesta, both were attacking and they were very good at it. While Iniesta found spaces to run into with his smart movement, Xavi dominated possession, threading passes through packed defences. Their lack of defensive nous was never a problem. With yielding every trophy available to win, their partnership has to be the best ever.